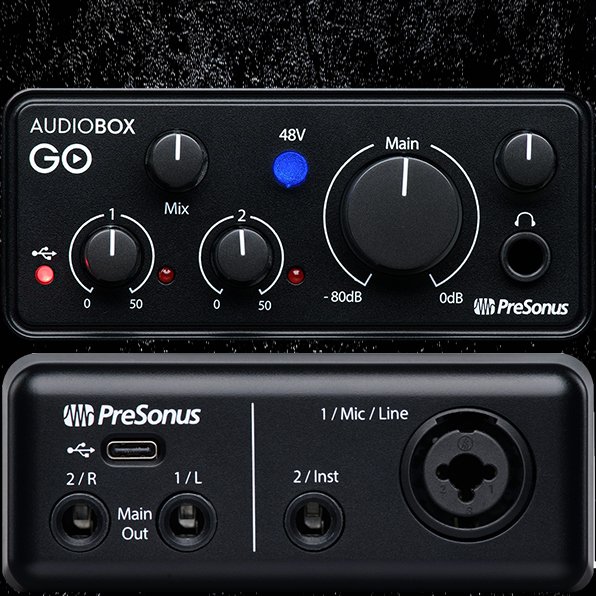 Ultra-affordable, surprisingly powerful, and small enough to fit in your pocket, AudioBox GO™ gives you all the connections you need to record on the move or in your home studio. Whether you’re recording a guitar riff at rehearsal or a full-length solo album in your bedroom, you’ll have all the tools you need to create like a pro, right from the start. Compatible with both computers and mobile devices, the AudioBox GO is perfect for anyone who wants to get started recording fast.

Studio One® Prime and the Studio Magic software bundle for Mac® and Windows® are also included, so your new recording studio will be up and running right out of the box. With AudioBox GO , you can record wherever sound takes you and make recording the adventure that it should be.


Connect anything and sound great.

The AudioBox GO™ features a PreSonus® XMAX-L preamp, designed with over 25 years of recording-studio knowhow. Not only does it ensure that your recordings will sound clean and articulate with low noise, it also provides 50 dB of gain and +48v phantom power for professional XLR condenser microphones. The combo jack doubles as a line-level input that you can use to record keyboards, drum machines, and more! A dedicated Instrument input lets you connect an electric guitar or bass, so you can record guitar and vocals at the same time.

True to its name, the AudioBox GO™ is so powerful and loaded with features, you’ll want to take it with you everywhere — so we made it small enough to toss into your guitar case or your laptop bag. AudioBox GO works great with Android and Apple mobile devices — but also with both laptop and desktop computers, making it an ideal interface for small home studios. It's USB class-compliant, so there are no special drivers or applications for you to download and install. And because it’s bus-powered, there’s no power supply to fuss around with.


The AudioBox GO™ lets you connect professional studio monitors like the PreSonus Eris-series to its balanced Main outputs, while also providing a surprisingly powerful Headphone output that lets you listen in loud and clear. You also get an easy-to-use Mix control to create a monitor mix by blending the audio from your hardware inputs and your software so you can record vocals while listening to the tracks you’ve already recorded and stay inspired.

Below are the minimum computer-system requirements for AudioBox GO.