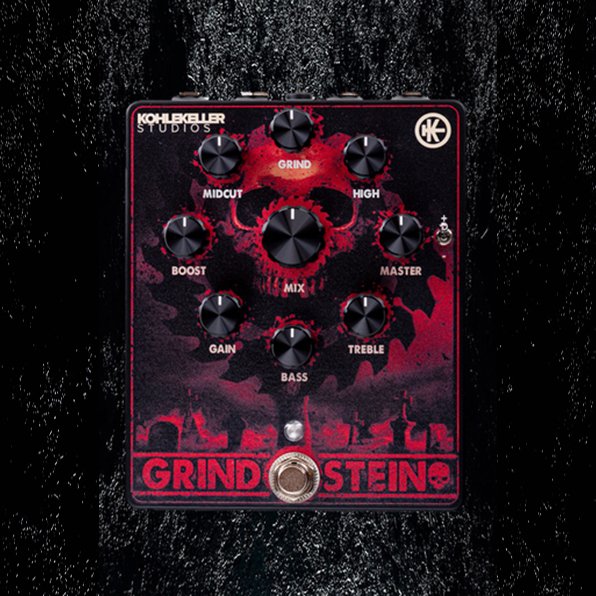 Sound:
We are taking the dirty and fuzzy death metal tones from the 90s into the modern age. You can go anywhere from a ripping chainsaw to a more modern and tight sound with just a touch of grind. It can go from the Swedish HM2 sound all the way to 90’s Florida transistor distortion, but with modern fat lowend and thightness like never heard before! A character beast with many dirty sonic possibilities! The ultimate combination of old school and modern! The pedal is intended to be played straight into the poweramp of a tubeamp with a cranked presence! (You can use it in front of an amp as well, but it’s not gonna produce the sound from our demovideos.)

Plug and Play recording device and livesound:
There’s Kemper profiles and IRs of different poweramps and cabs included. All recorded at Kohlekeller Studios. Using these profiles or IRs you can plug the Grindstein straight into your soundcard. So it’s plug and play even without a real amp both live and in the studio!

Effectloop to mix ANY sound with the chainsaw channel:
There’s an effectloop that gives you the possibility to mix YOUR favourite distortion pedal or tube preamp with the chainsaw channel of the Grindstein and there’s a phase switch for sonic experiments. Endless possibilities! So if you’re looking for something more dirty and charismatic than your everyday modern high gain, this is for you!

BUT BEWARE! The GRINDSTEIN is ugly and fuckin dirty!